Recently we had a customer contact us about masses of jelly like substances that were along his ponds edge...Weird right! 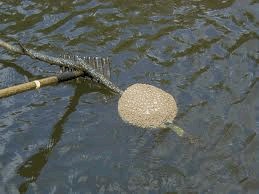 His concern was if he could use some of our products with the bryozoans.

He sent us some pictures and our aquatic specialists addressed what the creatures are and how our products can still be used in ponds that sustain bryozoans. 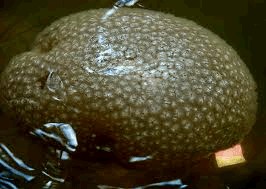 Bryozoans are colonies of zooids that function together to outcompete other creatures for a similar food source. They are filter feeders that are not finicky in their feeding habits. They filter the water and consume whatever microorganisms pass through their filter. These may include bacteria (both good and bad), protozoa, amoeba, planktonic algae, zoo plankton and the spores or young of these various organisms.

They do not consume non-living wastes that pass through the filter; only living organisms are taken up as food. It appears that they can only exist and thrive in oxygen rich and food rich environments. They also require a fairly clean (no turbidity from clay/silt) water. One other limiting factor would appear to be depth. A researcher noted that freshwater bryozoans were limited in his observation to around 6 feet of depth.

In light of these observations, First of all, bryozoans appear to be beneficial to removing unwanted organisms from the water, so elimination of them would likely be detrimental to the aquatic environment. Secondly, yes they will consume the spores from Natural Pond Cleaner if it is applied near them. My suggestion would be to apply the product out in the deeper areas of the pond where there would be a less likely interaction between the bryozoans and the bacillus spores. In this manner, it would be a mutual benefit to keep and sustain these two colonies in order to maintain a healthy pond environment.

If you should require control of a growing bryozoans population, simply remove a few and dispose of them in the garbage. However, the levels of colonial growth should adjust accordingly with the application of the Natural Pond Cleaner being made away from their location.